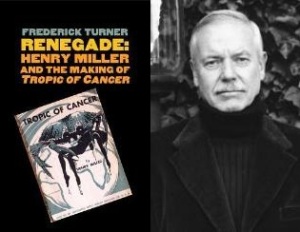 Renegade: Henry Miller and the Making of Tropic of Cancer by Frederick Turner is engaging, erudite, fluent and succinct yet full of novel biographical paraphernalia, which is guaranteed to captivate most Miller enthusiasts. The pulchritudinous little hardback, published by Yale University Press, chronicles how Miller’s first published novel “has risen from smuggled dirty book to American classic”. Turner employs Yankee folklore to explain Miller’s savage abandon and fascination with an anarchically subversive way of life steeped in “murky fringe land between a strict fidelity to the law and actual illegality”. It’s a daring interpretative mode, psychoanalytical speculation always is, but it works. Turner pinpoints certain undeniable similarities between Miller and his folklore primogenitors,  the infamous Mississippi brawlers, gamblers, crooks and filibusterers, who like Miller lived on their wits, shape-shifting, altering occupations, addresses and personae as circumstances dictated. Following in the same line of thought, Turner positions Miller alongside Mark Twain and Walt Whitman –  both once considered on the literary sidelines for their scabrous argots and iconoclast subjects –  to show how Miller inherited a tradition of prose “in the outsized, colourful monologue mode” of the colloquial, and subsequently nurtured it into his very own brand of “rude hieroglyphics”.

Miller had been jawing about becoming a writer long beforeTropic of Cancer, but for all his boorish braggadocio he had perilously little to show for it; or indeed his 30-odd years, except a divorce, a second falling marriage, chronic penury, a handful of literary rejection slips and a profound hatred of America, the unremitting “slaughterhouse” and “monstrous death machine,” as he called it. It is not clear when Miller’s fascination with Europe began, but Turner suggests it may have been inspired by his old school friend Emil Schnellock, with whom Miller corresponded extensively throughout his time in Paris and beyond.  Miller left for the French capital in February 1930, cajoled by his second wife June Mansfield Smith. He shipped out with a borrowed ten dollar note, two valises and a trunk. Turner explains: “In these he had some suits made by his tailor father; the drafts of two failed novels, and a copy of Walt Whitman’s Leaves of Grass. But within him, buried within the accumulated detritus of a random and crudely assembled self-education, Miller was carrying a great deal more than these meagre effects.” Indeed.  He was in fact carrying a myriad of fantasises, which fuelled by his imminent experiences would eventually materialize into a book that now “belongs on a select shelf of works that best tell us who we are, for better or worse”.

While this may only be marginally true for humanity as a whole, it is certainly true for Miller. Tropic of Cancer tells us everything we need to know about its writer, “the gangster author,” who penned a literary deviant, which reads like a variegated autobiography of inescapable Americanism and an aspiration to European sensibility, a libidinous and comical picaresque of a sexual adventurer and a lovable knave, a daring exposition of an ironic moralist, a manual to the lifestyle of the bohemian deadbeat and a triumph of crude and creative splendour. Turner’s sympathetic and skilful evocation of Miller’s time in the US and in Paris,  spent mostly in depravation with a retinue of factotums, the work that followed and how it ought to fit into the American canon offers some interesting insights; but it never unequivocally states the fact that for all his raging and retreating from the establishment Miller actually yearned to be integrated into the high-end literary tradition. For as Turner himself notes, while talking about his subject’s impoverished background, Miller was “cut from different cloth…so Miller the failed Ivy Leaguer, the college dropout… refused to submit to his cultural and personal fate,” by means of a literary self-erudition, a fanatical interest in EVERYTHING (hamburger sandwiches, collar buttons, poodle dogs, slot machines, grey bowlers, typewriter ribbons, oranges sticks, free toilets, sanitary napkins, mint jujubes, billiard balls, chopped onions, crinkled doilies, manholes, chewing gum etc)  and a desperate desire for self-actualisation. In fact, he became a sort of microcosmic noosphere, bursting with ubiquitous knowledge on the page as well as in person.

But neither the writing nor the inspiration came easily, not until Miller met June – at the time the only person who “believed in his star”. Following the chance meeting in the summer of 1923, Miller – then a husband, a father and a man with a responsible job at the Western Union – quit his career, divorced his wife, married June and embarked on a quest to become a writer. With very little success. Turner records Miller’s life with June – the woman who led to his emotional labefaction – with great attention to detail, concluding that “for Miller, June in one way and another inspired his three finest works, the Tropics and Black Spring”. Though often disputed, this is certainly true, for long-after the two separated June remained a permanent fixture throughout Miller’s life, indelibly looming over the man and his work. But there was another force behind Miller’s drive.  Upon his arrival to Pairs, Miller had “apparently lost everything, nationality, job, wife, even his language” thus to stave off loneliness he hit the streets with a notebook and a pen “walking great distances and making notes on virtually anything he happened to see, from the life of the cafes to the carcasses of the newly slaughtered horseS hanging from the market stall hooks”. And  almost everything he did see made it into the book. It is precisely this, his observational deft and pyrotechnical delivery – albeit occasionally blemished by overindulgence in periphrasis and even unabashed flummery -that makes Tropic of Cancer remarkable, brilliant.

Renegade: Henry Miller and the Making of Tropic of Cancer is a considered and intriguing book, which aims to show how Miller’s “heroic confrontation” of his own failures eventually made him into a success. Turner treats his subject objectively but with great enthusiasm and at times with much-needed caution, knowing all too well that Miller was prone to casuistry and embellishment. The discerning biographer does well to outline most of Miller’s influences, friendships, struggles and aspirations, the main one of which was to write a  magnum opus for his wife (June), which earned him great admiration among certain circles and a “shadowy reputation as a writer of truly dirty books” among others. Turner remains the voice of reason throughout the narrative, only occasionally showing disdain for Miller’s callousness and dubious morality, when for example Miller refers to his aborted baby as the “seven month toothache” or neglects his duties as a husband and father. On the whole, Turned does well to pieces all the elements together to show how Tropic of Cancer materialised, even if he doesn’t place the book or its legacy into a greater political and socio-economic context. (Some reviewers have griped.)  Still, there is something he says which is on the money, namely that “writing with an increasingly naked candour about his life” Miller was bridging the gap between “autobiography and literature,”  and since many a great writer has followed the path that Miller bravely blazed.

Jean Genet: A poet, a moralist and an abandoned child

A couple of days ago, while meandering home from work I took a little detour and popped into the Oxfam bookshop on Bloomsbury Street where I picked up a forsaken edition of Funeral Rites by Jean Genet. Once described as a “moralist” and a “great poet” by Jean Cocteau, Genet was more commonly known as France’s foremost contrarian. Funeral Rites, the last novel Genet ever wrote, reads like a fiendish dirge “composed mainly of love and pain” by a man’s “grieving heart”. The sacred is enmeshed with the profane seamlessly, as one minute the narrator reminisces about his “dearest and only lover” while the next he rapaciously recounts all the various sobriquets for the anus, the “dark, ultimate treasure, the bronze eye”. Yet the book addresses a bigger question, a moral one of a man’s struggle with grief over his dead lover – a French Resistance fighter killed by the “prodigy of a well-aimed” Nazi bullet – and his struggle with apostasy.  His consternation comes to the fore as early as his lover Jean’s funeral, when he finds himself conflicted by angst of seeing his lover’s limp “precious corpse”  juxtaposed against sights of male mourners, which prompt sudden erotic thoughts and a yearning for their “tenderness”. He pensively fingers a matchbox in his pocket, drawing parallels between the two death-boxes, and yet mourning quietly in private he becomes distracted again by his lover’s brother, his eyes resting on the boy’s fly and the “bulge beneath the cloth of his trousers”.  The protagonist cannot reconcile his grief and his carnal impulses, and the inner conflict to do so is conveyed as much through action as the dirty, baroque idiolect.

Funeral Rites is set in Paris in 1944 during the struggle for power between the French Resistance and the advancing German Army. The backdrop to Genet’s story is illustrated by graphic images of ubiquitous bullets, puling sirens and overcast skies hanging above the devastated city like memento mori for those killed in battle. The theme of defection both from love and country dominates the narrative, and is defined most markedly when the narrator announces: “If was told that I was risking death in refusing to cry ‘Vive la France’, I would cry it in order to save my hide, but I would cry it softly.” He continues: “If I had to cry it very loudly, I would do so, but laughingly, without believing in it. And if I had to believe in it, I would; then I would immediately die of shame.” Later, the betrayal is that of his lover, as he pours “rivers of love” over a strapping German called Erik. The two elements, however, come together when the narrator contemplates his loss and his own betrayal of his lover with the enemy. The narrative, however, gradually strays from the dead to the living, focusing on the incestuous relationships between various characters in the book.

The heterogeneous plot chronicles the narrator’s interaction with several members of Jean’s family – his moribund brother Paulo, his neurotic bourgeois mother Giselle, his insipid fiancée Juliette – as well as the Nazi pistolier Erik and an adolescent French traitor Riton. The oedipal relationships are steeped in both fantasy and reality with the narrative moving back and forth in time, from the sacrilegious to the philosophical, as the protagonists ruminates about sex, death and love.  The scope of this ominous ideology is charted when he says: “Evil, like good, is attained gradually by means of an inspired insight that makes you glide vertically away from human beings, but most often by daily, slow, disappointing labour.” The narration is sometimes convoluted, particularly when the narrator trans-morphs mid scene into the character he is describing, but then a familiar voice re-emerges affirming  the story which “expresses the secret iridescence” of his heart, while he attempts, to extricate himself from the guilt and the grief over his dead lover.

Funeral Rites, like every other novel in Genet’s canon, borrows significantly from his life. Born in Paris, the illegitimate son of a prostitute, who left him in the hands of Assistance Publique, Genet documented his experiences in his work. “I’m an abandoned child who knows nothing about his family or his country,” says the narrator at one point, mirroring Genet’s fate.Genet spent most of his youth in and out of prison, an experience which he later documented in The Thief’s Journal.  Funeral Rites like The Thief’s Journal is a transposition and sublimation of Genet’s own life; a life of a man who had always felt an outsider. The most accurate summation Funeral Rites comes from Genet himself who once called it a “prismatic decomposition” of the human condition, for it is exactly that and a masterfully macabre, chimerical study of the correlation between love, sex and death.