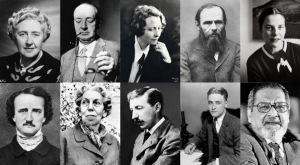 “I really like Agatha Christie. She obeys the rules of the genre at first, but then occasionally she manages to do very personal things.”
Michel Houellebecq

“There’s no music in Nabokov, it’s all pictorial, it’s all image-based.”
John Banville

“It’s so much better, you see, for me, when a writer like Edna St. Vincent Millay speaks so deeply about her concern for herself and does not offer us any altruisms.”
Maya Angelou

“Dostoyevsky was one of the first writers…to identify a crisis of modern civilization: that every one of us is visited by contradictory voices, contradictory physical urges.”
Czeslaw Milosz

“I think Miss [Mary] McCarthy is often brilliant and sometimes even sound. But, in fiction, she is a lady writer, a lady magazine writer.”
Lillian Hellman

“Eudora Welty has tremendous class, not just in her work, but in the way she walks, the look in her eyes, the way she has conducted her life.”
Ken Kesey

“I suppose E. M. Forster is the best.”
Dorothy Parker

“I often feel about Fitzgerald that he couldn’t distinguish between innocence and social climbing.”
Saul Bellow

“Naipaul is a great person to read before you have to do a piece.”
Joan Didion 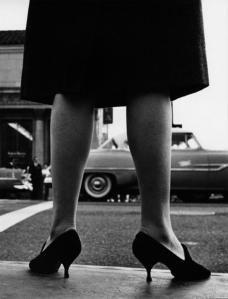 “There’s little in taking or giving,
There’s little in water or wine;
This living, this living, this living
Was never a project of mine.
Oh, hard is the struggle, and sparse is
The gain of the one at the top,
For art is a form of catharsis,
And love is a permanent flop,
And work is the province of cattle,
And rest’s for a clam in a shell,
So I’m thinking of throwing the battle-
Would you kindly direct me to hell?”

“Colette is a writer one should know something about.”
James Salter

“I started reading DeLillo pretty much when he started publishing. He was, and is, one of my heroes.”
Ann Beattie

“Milton…was a true poet and of the Devil’s party without knowing it.”
William Blake

“Angela Carter has remarkable descriptive gifts, a powerful imagination, and… a capacity for looking at the mess of contemporary life without flinching.”
Anthony Burgess

“I still think Shelley is an underestimated poet.”
Michael Frayn

“I am a fanatical admirer of A. L Barker. If you cannot read her it is your fault.”
Rebecca West

“I do like to write dialogue, intense forms of which I admire in Henry Green’s novels.”
Shirley Hazzard

“Being in a garret doesn’t do you any good unless you’re some sort of a Keats.”
Dorothy Parker

“Saki says that youth is like hors d’oeuvres: you are so busy thinking of the next courses you don’t notice it. When you’ve had them, you wish you’d had more hors d’oeuvres.”
Philip Larkin

“William James says that in times of trauma and crisis a door is opened to a place where facts and apparitions mix.”
Susan Howe

Dorothy Parker: “Speeding bullets through the brains of the folk who give me pains”

I was once told by a friend that if Dorothy Parker was still alive she would buy me a big martini. I don’t know whether or not that’s true but I know that if I had the opportunity I’d buy her several. I discovered Parker very early on in my life and have returned to her writing time and again. A couple of months ago, I purchased her selected works in an Oxfam on High Street Kensington and have been meaning to flick through them since. Trying to review someone I admire as much as I do Parker is always somewhat daunting, but to hell with it I might as well impart my very own “Pig’s-Eye View”. Born in West End, New Jersey, on August 22nd,1893, Parker began her career at Vogue writing by-lines and captions, such as: “This little pink dress will win you a beau.” Irremeably bored with the corseted muliebrity of the editorial collective, she moved to Vanity Fair and took over from P. G. Wodehouse as a theatre critic before being sacked for panning a couple of plays. Later, speaking about the precarious start to her career she said: “Vanity Fair was a magazine of no opinion, but I had opinions. So I was fired.”

Parker signed nuptials twice; both of her husbands died. The first, Hartford dandy and Wall Street broker Edwin Pond Parker II, was often the butt of her jousting as a somewhat maladroit character forever falling down manholes and breaking his arm while sharpening pencils.  As was her second husband, screenwriter Alan Campbell, of whom she once noted: “Don’t worry about Alan.  Alan will always land on somebody’s feet.” Campbell was found dead in their home from a barbiturates overdose. When Parker was reportedly asked by a friend if there was anything she could do, the poetess replied: “Get me a new husband.” Parker’s facetious attitude to death was reflected as much in her personal life – one prematurely dead mother, two deceased husbands and a quartet of failed suicide attempts – as in her work. So much so, that in her early 20s she penned her own epitaph and brandished it with slipshod equanimity.  And later, in her senescence, when asked what she was going to do next she told an interviewer: “If I had any decency, I’d be dead. All my friends are.”

A consummate overachiever Parker defied society’s mandates by muzzling the misogynistic literati with quips as sharp as a needle-tip and vitriolic spitfire comebacks to rival those of Oscar Wilde. Recollecting her heyday, she once said: “A ‘smartcracker’ they called me, and that makes me sick and unhappy. There’s a hell of a distance between wisecracking and wit. Wit has truth in it; wisecracking is simply calisthenics with words. I didn’t mind so much when they were good, but for a long time anything that was called a crack was attributed to me…” She never quite managed to jilt her public person and her reputation as an Algonquin “smartcracker” preceded her, but unbeknownst to herself Parker was the greatest female wit in America. Her literary canon boasts an array of genres but my favourite has to be her poetry; grandiloquent, flippant, sagacious, nihilistic, hedonistic, unnerving, macabre, silly, and of a nonpareil Herculean capacity to leave the reader in a head-spin. There is nothing like the rhymes inked by this “pampered heir to Hell” with her emerald green eyes, her sable-like hair and a boa in her hat so imposingly baronial that it became a fire hazard around cigarettes. But the real hazard was, of course, Parker herself. She would perennially shock polite society with her caustic repartee, such as “One more drink and I’d have been under the host,” or remarking about a strapping but panurgic lover who had ditched her, “His body went to his head,” and speaking of another who died of tuberculosis, “I don’t see what else he could have done”. But the most infamous of her one liners, however, was directed toward a society lady, Clare Boothe Luce, who Parker encountered in a doorway at literary saloon. Luce suggested Parker go first, saying “Age before beauty,” to which Parker replied, “Pearls before swine.”

Under Prohibition, Parker would frequent bohemian speakeasies for preprandial drinking which would continue well into the night, resulting in missed deadlines and nonchalant excuses such as: “Someone else was using the pencil.” In her view, editors were “idiots” and the staff at Vanity Fair consisted of valetudinarian “young men who go to pieces easily. Even when they’re in the best of health, you have to stand on their insteps to keep them from flying away”.  She left the magazine in 1920, and became a household name as one of the members of the Algonquin Round Table, where along with Robert Benchley, Robert Sherwood, George S. Kaufman, Heywood Broun, Alexander Woollcott and Franklin P. Adams she lunched all day, imbibed martinis and honed her picric tongue. With a poodle under her oxter and a wide brimmed hat, Parker wrote her verses in classical form, but with a caustic, rueful note. Her work, gravid with cynicism, disillusion, and the disappointing quest for love, also features an abiding symbolic and metaphysical preoccupation with death.  Like the Romantics, she longed for the ecumenical ever-lasting amour, the true, the real, which she nevertheless attempted to denigrate at every opportunity with open disdain for her own emotions.  Themes of failure, abandonment, self-deprecation and death are isolated and interwoven together in Parker’s verse, and always remarked upon in sardonic tones. In Inventory for example she says, “Four be the things I’d been better without/Love, curiosity, freckles, and doubt”,  while in Pour Prendre Conge she records her hurt: “I’ll never again like a cub lick/My wounds while I squeal at the hurt/No more I’ll go walking in public/My heart hanging out of my shirt”, and similarly in “Little Words”,  “When you are gone, there is no bloom nor leaf/No singing sea at night, nor silver birds/And I can only stare and shape my grief/In little words/There is no mercy in the shifting year/No beauty wraps me tenderly about/I turn to little words – so you, my dear/Can spell them out”. In Cherry White her attention moves to the theme of suicide, “I never see that prettiest thing/A cherry bough gone white with Spring/But what I think ‘How gay`twould be/To hang me from a flowering tree”, later the theme is more overtly vocalised in Coda when the poetess declares: “There’s little in taking or giving/There’s little in water or wine/This living, this living, this living/Was never a project of mine.” Parker also dashed of many philippic little verses and limericks such as Godspeed (I’ll not be left in sorrow/So long as I have yesterday/Go take your damned tomorrow!), Frustration (If I had a shiny gun/I could have a world of fun/Speeding bullets through the brains/Of the folk who give me pains), News Item (Men seldom make passes/At girls who wear glasses), Oscar Wilde (If, with the literate, I am, Impelled to try an epigram/I never seek to take the credit/We all assume that Oscar said it) and Unfortunate Coincidence (By the time you swear you’re his/Shivering and sighing/And he vows his passion is/Infinite, undying/Lady, make a note of this/One of you is lying). My own favourite Parker poem, however, is Résumé which goes thus: “Razors pain you/Rivers are damp/Acids stain you/And drugs cause cramp/Guns aren’t lawful/Nooses give/Gas smells awful/You might as well live.” Indeed.

Speaking to Paris Review in her 70s Parker noted: “My verses are no damn good…terribly dated—as anything once fashionable is dreadful now.” She was of course right, at least in part, some of her work seems anachronistic, musty, but her ability to dispense with circumlocution and give naked emotion direct and with unparalleled wit is what makes her one of the greatest minds of her generation. A brutal emendator of her own work, she often threw away what others would have laboured over, and once prescribed that in order to write: “There must be courage, there must be no awe.  There must be criticism… There must be a disciplined eye and a wild mind.  There must be a magnificent disregard for your reader, for if he cannot follow you, there is nothing you can do about it.” She had all the “musts” in abundance, and as Ogden Nash once said Dorothy Parker’s “trick about her writing” was simply that “it wasn’t a trick”. She was just that good.