The Folded Man by Matt Hill 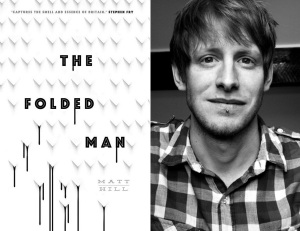 The cover of Matt Hill’s debut bears a quote by Stephen Fry, which tells us that the work within captures the “smell and essence of Britain”. This is a considerable claim but one that rings entirely true, despite the book’s post-apocalyptic premise. The Folded Man offers a frighteningly plausible rendition of the future, bleak and disturbing.  The city is Manchester, the year is 2018. The five year leap forward sees the country in ruins, plunged into social disorder, widespread deprivation, violence, crime and vigilante rule. We learn of this desolate new world through the book’s protagonist Brian Meredith, a drug-addled “cripple” reliant on the state which he fears and despises. It is both through Brian’s internal meditations and external experiences that Hill creates a chilling picture of the outside world – a phantasmagorical panorama which constitutes the backdrop of the story. Both dynamic and very craftily constructed, it compells the reader to fully immerse in the writer’s vision of the future, bereft of the social norms and conventions that govern modern Britain.

The Folded Man crosses several genres and defies exact classification, comprising elements of Sci-Fi, surrealism, traditional storytelling and experimentation. Hill locks a range of themes into a novel literary whole, defined by intricate plot turns, seemingly freeform dialogue and a prolonged sense of suspense. It is Hill’s ability to tap into our collective consciousness that lends the book much of its realism, and his dark imagination that turns a straightforward narrative into a dystopian riddle. But it is the book’s protagonist, Brian, that’s The Folded Man’s real strength. Albeit a highly divisive character, Brian is predominantly a victim. Wheelchair bound by a rare genetic condition called Sirenomelia (Mermaid Syndrome), he spends his time in his squalid flat watching the world on CCTV and eating his own hair. There are reasons behind Brian’s psychological idiosyncrasies, which Hill weaves into the plot seamlessly. We learn in vivid snapshots of his early life and his upbringing, his fears, desires and worries and discover a very complicated and downtrodden man, who has resigned from life until his mate Noah coaxes him into an outing across the city.

The pair’s excursion leads to a series of events and characters that are at times as bizarre as they are exhilarating. Hill fuses the real with the imaginary, the factual with the fantastic to create a world characterised by an eerie introverted externality. This eeriness also extends to Hill’s literary stylings, which give the book its narrative verve. Written entirely in northern dialect, The Folded Man is full of linguistic quirks, colloquialisms and staccato sentences, sometimes as short as a single adjective. “Brian’s in his chair – the wheelchair in the middle of his world,” writes Hill of his protagonist when he returns home from the outing with Noah, “All the days are the same. All day, every hour – trapped. The fat man in his yawning city. Ageing. Smoking and sleeping between damp walls and under bare bulbs. The fat man who sat through power cuts and water shortages. Listened to new riots and masked radicals on his telly. The same chair at the arse-end of Manchester, old capital of the north. The cold city, the blinking city.” The Folded Man is both a dark tale of humanity and a tribute to Hill’s home city. Manchester is very much at the heart of the novel – a city once great now reduced to an abject quagmire by an “endless war for love between the dead and dying”.

It is difficult to imagine The Folded Man being set anywhere else, just as it is difficult to imagine the protagonist being anyone other than Brian. This is a great achievement on Hill’s part, a writer whose style and subject matter may be considered challenging. But Hill is someone who didn’t set out to write a challenging debut, merely a book that came together almost miraculously inspired by his interest in folklore, urban legends and strange phenomena, his home town and some of the people he’s met there. Brian, for example, Hill told me recently, was partly a result of his experiences with “a close relative who had terrible hip problems from a very young age” and partly a product of his own imagination, fuelled by “one of those crap, slightly exploitative documentaries about a girl born with Sirenomelia”. Brian’s congenital disorder is as integral to the plot as it is to his character. “I wanted Brian’s condition to be as ‘realistic’ a treatment of the mermaid myth as possible,” Hill explains, “So even though the book veers away from reality (far, far away in places), there’s at least a medical grounding.” There certainly is that but there is also more – much more – than that to this intriguing debut which, as Stephen Fry said, has a “direct vividness that keeps one inside its totally realised world”.

The Folded Man is an absorbing and original work that falls into a somewhat nebulous field of literary production. Hill has a keen eye for topical peculiarity similar to the writers in the prophetic tradition, distinguished by their ability to penetrate surface-reality and delve into the deepest recesses of the human psyche. In line with this tradition Hill tells the story from an outsider’s perspective, which gives The Folded Man its disturbing immediacy. It also prompts the reader to question – or at the very least ponder – the validity of the moral, cultural and socio-economic structures that frame our society and the potential consequences of their abolition. J.G Ballard once wrote that “civilised life” is based “on a huge number of illusions in which we all collaborate willingly” and the trouble is that we sometimes forget “that that they are illusions and we are deeply shocked when reality is torn down around us”. Hill’s book serves as a stark reminder of this, urging us to look at the uncomfortable and unsightly possibilities behind those seemingly orderly and burnished optical trickeries.