Charles Bukowski: A scuzzy rhymester with some dirty stories 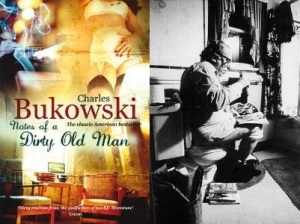 Sitting inertly in the mid-afternoon sun, after a night of hellish revelry, I tried to shut out my companion’s comical cooing by losing myself in a book. I have been a little slack with my reading lately, thus needed a metaphorical kick up the posterior to propel me out of the lethargy. Earlier in the day, I had chanced upon A.A. Gill’s review, of some trendy eatery or other, replete with customary witticisms about the victuals and the somewhat unexpected topic of misogyny. I cannot recall the theoretical imperative which prompted Gill’s spiel but it got me thinking. There have been many writers throughout history accused of being less than favourable in their treatment of women, and more often than not Charles Bukowski has featured on the list. I personally don’t see it, but then perhaps I’m somewhat biased due to my unwavering love for the man. Inspired by the above thought, I picked up Notes of a Dirty Old Man and spent the remainder of Sunday devouring the collection of Bukowski’s newspaper columns for Open City, which by Bukowski’s own definition was, at the time, “the liveliest rag in the US”.

The “liveliest rag” in the land was a perfect match for the liveliest writer of his generation, who infiltrated the somniferous rodomontade of the literary world with his own brand of irreverent penmanship. The snapshots of Bukowski’s life, gathered in the book, cover a multitude of sins from “fucking up to, fucking out” from dying to live to living to die. Pondering the contentious topic of suicide Bukowski, says: “Suicide seems incomprehensible unless you yourself are thinking about it…I think it was in 1954 that I last tried suicide. I closed all the windows and turned on the oven and the gas jets…I stretched out on the bed. I went to sleep. It would have worked too, only inhaling the gas game me such a headache that the headache awakened me. I got up off the bed, laughing and saying to myself ‘You damned fool, you don’t want to kill yourself…some hangover, some column”. Some column, indeed. Unfortunately, there aren’t many columnists like Bukowski nowadays, fewer still labouring in the tenebrous brume of a hangover like some of their readers. It is a bit of a shame that modern day papers are filled with anesthetised and insular expositions about organic rhubarb compote, the dimensions of one’s carbon footprint, psychologically contented chickens and other suchlike middle-brow fixations.  And, don’t even get me started on the credentials of the excerebrose scriveners and pseudo-intellectuals churning this bullocks out.

But, perhaps everyone is indeed entitled to their opinion like the doctors at the county general hospital who told Bukowski “one more drink and you’re dead”. That didn’t stop him, not for a long while. He continued living “surrounded by full and empty beer cans, writing poems, smoking cheap cigars…and waiting for the final wall to fall.” That didn’t happen for a while either, at least not before he got hitched – on a whim. She sent him gnathonic letters bewailing her impending fate as a spinster; Bukowski took pity and prompted by some eleemosynary instinct proposed. He remembers: “I met her at the bus station, that is I sat there drunk waiting for a woman I had never met, spoken to, to marry. I was insane. I didn’t belong on the streets.” Luckily, she turned out to be “a cute sexy blonde…all ass and bounce”. A quick round-trip to Vegas and the two were wed-locked and bound for her home town in some smoggy part of Texas. She was a millionaires and a self-confessed nymphomaniac, he “the city slicker who had hooked the rich girl,” with nothing but a “very tired cock and a suitcase full of poems.” Eventually, the two went back to LA to live in a dingy bedsit, Bukowski recollects, very candidly: “When we fucked the bed would shake the walls and the walls would shake the shelves, and then I’d hear it: the slow volcano sound of the shelves giving way and then I’d stop. ‘No, don’t stop, oh Jesus, don’t stop.’ And then I’d catch the stroke again and down the selves would come, down on my back and my ass and head and legs and arms and she’d laugh and scream and MAKE IT.” Unfortunately, being a nymphomaniac she would also “make it” with others. “Every man believes he can tame a nympho but it only leads to the grave,” in Bukowski’s case, however, it led to a divorce. She later remarried a fisherman, or as Bukowski put it: “I once lost a million dollars to a Japanese fisherman.” There’s always humour in Bukowski’s sadness, and an admirable resignation to take the knockbacks with a drink, because “the waste and the terror, the sadness and the failure, the stage play, the horseplay, falling down, getting up, pretending it’s ok, grinning, sobbing”  is all part of the “grandiose romanticism” and politics of life.

In another column Bukowski relays meeting “[Jack] Kerouac’s boy Neal C[assidy] shortly before he went down to lay along those Mexican railroad tracks to die.” Neal was berserk like a girandole “jogging, bouncing, ogling” and singing like a cranky “cuckoo bird”. Bukowski recalls: “He never sat down. He kept moving around the floor. He was a little punchy with the action but there wasn’t any hatred in him.” There’s a sense of melancholy in Bukowski’s tone, and one gets the distinct impression that Neal was already too loaded on the “Eternal High” and  too quick on the pedal in the drag race towards death. Upon hearing news of Neal’s passing, shortly after their first and only meeting, Bukowski turned his column into a eulogy for the last of the Beats, saying: “All those rides, all those pages of Kerouac, all that jail time” and for what? To “die alone under a frozen Mexican moon,” like his life meant nothing to anybody, not even himself. And yet, it did mean something, in part, thanks to the “dirty old man” who wrote about it in his column, and felt the loss. In Notes of a Dirty Old Man, Bukowski ploughs through a phantasmagoria  of topics from the erosion of democracy to the aching of scraped knuckles, from psychotraumatic childhood memories to the “tragicomedy of fucking”, but always in a unique argot of a scuzzy rhymester and in a style entirely his own. Fucking features heavily throughout Bukowski’s work, but as he says: “I don’t write about it as an instrument of obsession. I write about it as a stage play laugh where you have to cry about it, a bit, between acts.” And he sticks to his word, crying and laughing intermittently in the subtext of every page while regaling the reader with some botched tryst with a whore and her interfering elephantine lesbian pimp. He does that, he cries and laughs, and then pours himself a drink before falling unconscious and letting the “world go by”. But not for long as there’s far too much loving, boozing, fighting and writing to do.

Notes of a Dirty Old Man is a bawdy, intense and candid book, diving into the ugly, the awkward, the tearfully funny and the heart-breaking without holding back. And one soon gets sucked into the frenzied coprolalia of Bukowski’s prose written with a recognisably dark sense of humour throughout. The collection offers a sublime insight into Bukowski’s psyche and the dizzying myriad twists of the writer’s life. Bukowski surmises it himself in the introduction by simply saying: “I am just an old guy with some dirty stories.” And he’s right, but he is also someone who writes about the “upside down, romantic, explosive things that seem to give chance to no chance,” and someone who loaded with an arsenal of beer cans and women power-drilled through minds and column inches affronting, offending and galling thin skinned Middle America because “sometimes you just have to pee in the sink.”

4 Comments to “Charles Bukowski: A scuzzy rhymester with some dirty stories”